Skip to main content
Authored By
Orthodox Church of America 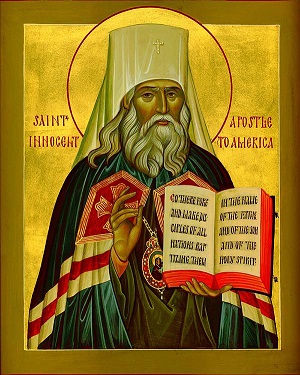 John Veniaminov was born on August 26, 1797 in a rural village of the Irkutsk province in Russia. His father was a church server and taught John to read the Epistle at a very young age. When he was six years old, he was orphaned.

At the age of ten, John was assigned to the Irkutsk Theological Seminary. He was a very hard worker and an outstanding student. He was also very humble and kind. When he was 20, he was married and ordained to the diaconate. Following graduation from the seminary, he became a teacher at the parish school and was ordained to the priesthood.

He served as a parish priest for two years in Irkutsk and in 1824 he volunteered to do missionary work in Alaska. When he was 26 years old Father John and his family traveled over 2,000 miles on a fourteenmonth journey to Unalaska, in the Aleutian Islands. There he lived in a hut with his wife, elderly mother, baby son Innocent, and brother. At Unalaska he taught the natives of the islands to be carpenters, blacksmiths, and bricklayers. In return, they helped him build a church, which they named Holy Ascension.

Father John continued to travel to remote areas throughout Alaska by canoe, dog sled, and even reindeer. In order to talk to the natives, he learned six different native languages. To help them learn about the church, he translated the Scriptures and other church books into their languages.

After spending fourteen years in Unalaska and Sitka, he returned to Russia to ask for more support and money for his work in Alaska. When he arrived there, he got the sad news that his wife had died. He made the decision to stay in Russia and was tonsured a monk and given the name Innocent. On December 15, 1840, he was consecrated Bishop at Kazan Cathedral in St. Petersburg, Russia.

As Bishop he returned to Alaska and spent many years traveling throughout his diocese. He continued to build churches, guide the priests under his care, and bring the Gospel to the native Alaskan people.

After his appointment as Metropolitan of Moscow in 1867, he continued to raise money so priests would have a better life and a place to live after they got older.

O holy father Innocent / in obedience to the will of God / you accepted dangers and tribulations / bringing many peoples to the knowledge of truth. / You showed us the way, / now by your prayers help lead us into the Kingdom of Heaven.

A true celebration of the providence and grace of God / is your life, O holy father Innocent, Apostle to our land. / In hardships and dangers you toiled for the Gospel’s sake / and God delivered and preserved you unharmed. / From obscurity He highly exalted you as an example / that the Lord truly guides a man in the way he should go.