Today, the church commemorates St. Ansgar, Apostle of the North and Enlightener of Denmark and Sweden!

St. Ansgar was born to nobility in France in 801. According to “Vita Ansgarii” (“Life of Ansgar”), written by St. Rimbert, he was pious from a young age, experiencing spiritual revelations that encouraged him to turn away from the world and keep his heart set on God. For example, St. Ansgar had a vision of his late mother with the Virgin Mary, who advised him to flee from vanity. This encounter became his inspiration.

In 822, St. Ansgar set out with other missionaries to found the abbey of Corvey in Westphalia, Germany, where he was a teacher and a preacher. He was then sent on a short-lived mission to evangelize Denmark before being appointed a missionary to Sweden around 829. Prior to embarking on that mission, St. Ansgar experienced yet another vision, in which he asked, "Lord, what will You have me to do?" He heard a voice say, "Go and declare the word of God to the nations." According to Britannica, he was the first to preach the Gospel in Sweden. He helped form a small congregation in Birka in 831.

St. Ansgar eventually became the archbishop of Hamburg and Bremen. In Hamburg, Germany he founded a monastery and a school.

He initiated a mission to all of Scandinavia with the approval of Pope Gregory IV, who appointed him the archbishop and papal legate to the Scandinavians and Slavs. This earned him the title of the “Apostle of the North.” He died in 865, disappointed that his wish to be a martyr went unfulfilled. Though, his friends assured him that his life was one continuous martyrdom as a result of the hardships he endured for the faith. St. Ansgar is now considered the patron saint of Scandinavia.

St. Ansgar is remembered by St. Rimbert, who succeeded him as archbishop of Hamburg and Bremen, as an extraordinary preacher as well as a humble and ascetical priest, who was devoted to the poor and sick. It is said that his approach to mission work was one of love, prayer and self-sacrifice. According to “Vita Ansgarii,” when one of St. Ansgar’s disciples suggested that he could work miracles, he said, “Were I worthy of such a favor from my God, I would ask that He would grant to me this one miracle, that by His grace He would make of me a good man.”

St. Ansgar is particularly inspiring because of his perseverance. For every step forward, it seems he took two steps back. He started as a missionary in Denmark but left without noticeable success. He faced incredible hardships, including being robbed by Vikings. Funds were halted for the northern apostolate on multiple occasions. After 13 years of work in Hamburg, the city was invaded by the Danish, causing both Denmark and Sweden to return to paganism. Despite all of this, St. Ansgar continued his work, building relationships and spreading the Gospel throughout Scandinavia. 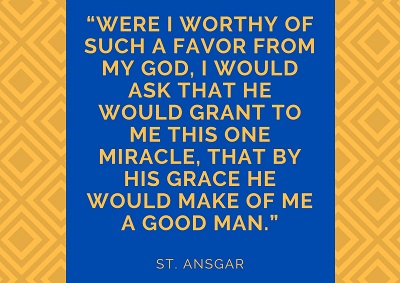 Sometimes missionaries set out to the field with immense zeal and big dreams that may not align with the reality they’re facing and God’s plans. St. Ansgar’s story is a fresh reminder of advice I received from Protodeacon Peter Danilchick, the vice chair of the Orthodox Christian Leadership Initiative: “Converting people is the wrong attitude,” he said, adding that the focus should be “Thy will be done.” The goal of mission work is to plant seeds and draw people closer to God through compassion, love, listening and teaching. “Your job is to sow. It’s for other people to reap,” said Deacon Peter, who has served at domestic and overseas parishes and missions for nearly 45 years. “Just go out with buckets of seeds and keep seeding.” He also said that every missionary will face rejection, but Jesus Christ is the example, as he faced reality and pressed on. St. Ansgar exemplified these perspectives in his mission across Scandinavia. He planted seeds over time and never gave up in the face of trials and persecution. St. Ansgar was the epitome of 2 Corinthians 4:8-10, sharing the light of the Gospel amid continuous affliction:

“We are afflicted in every way, but not crushed; perplexed, but not driven to despair; persecuted, but not forsaken; struck down, but not destroyed; always carrying in the body the death of Jesus, so that the life of Jesus may be manifested in our bodies.”

After St. Ansgar's death, Sweden and Denmark returned to paganism. Though, Adam of Bremen, a historian and ethnographer of the medieval period, said, "Some small part of the Christianity that had been planted by Ansgar had remained, the whole had not failed." St. Ansgar had planted seeds and a foundation was laid. Charles H. Robinson, the author of an introduction to “Vita Ansgarii” for Fordham University's Medieval Sourcebook said, "The claim to the title Apostle of the North, which was early made on [St. Ansgar's] behalf, rests not upon the immediate outcome of his labors, but upon the inspiring example which he bequeathed to those who were moved to follow in his steps." And I, as one of the Orthodox Christian Mission Center's first missionaries to Scandinavia, will follow in his steps. Glory be to God!